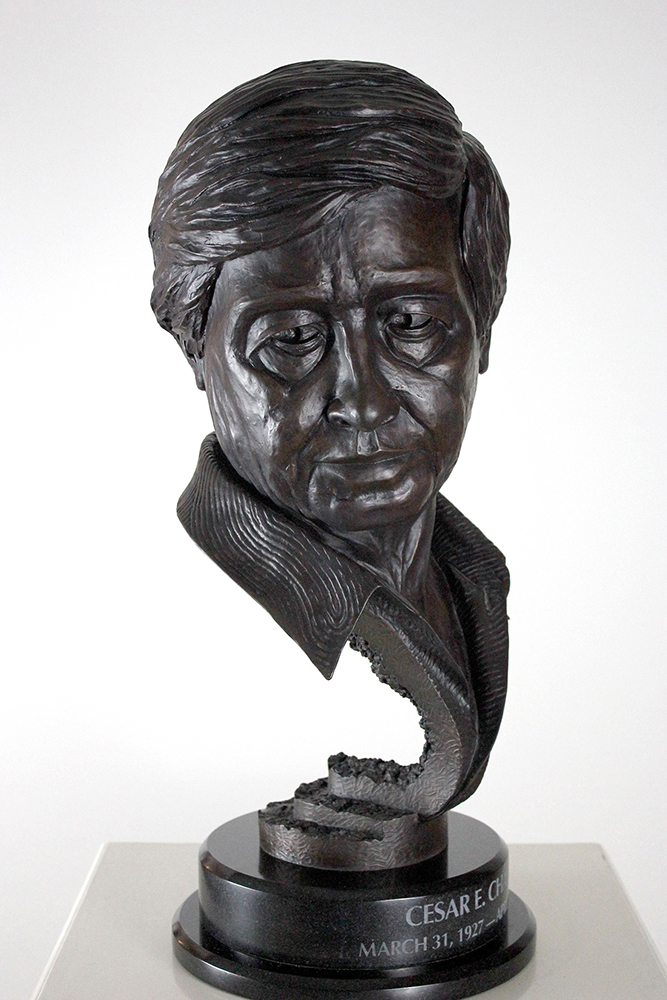 Keene, Calif.—A bronze bust of civil rights and farm labor leader Cesar Chavez is on display in President Joseph R. Biden Jr.’s Oval Office. The 9” by 22” bronze sculpture on a granite pedestal by artist Paul A. Suarez had been on display in the Visitor Center of the Cesar E. Chavez National Monument, the 398th unit of the National Park Service (NPS). This is where Chavez lived and labored his last quarter century and where he is buried alongside his wife, Helen, in the Tehachapi Mountain town of Keene, Calif. southeast of Bakersfield.

The President-elect’s transition team requested the artwork for the Oval Office and it was shipped to the White House by the Cesar Chavez Foundation, which through its arm, the National Chavez Center (NCC), helps administer the national monument in a partnership with the park service.

“Placing a bust of my father in the Oval Office symbolizes the hopeful new day that is dawning for our nation,” said Paul F. Chavez, Chavez’s middle son and president of the Cesar Chavez Foundation. “That isn’t just because it honors my dad, but more importantly because it represents faith and empowerment for an entire people on whose behalf he fought and sacrificed.”

“The most important quality about Cesar Chavez I wanted to convey with this sculpture was his compassion,” affirmed the artist, Paul Suarez. “It was created 25 years ago, relying heavily on research and input from people who were close to him.”

The historic Keene property, encompassing 187 acres, is managed collaboratively by the National Chavez Center and National Park Service. It includes three acres NCC donated to the park service to create the national monument when it was dedicated by President Obama during a ceremony in 2012. The Cesar Chavez Foundation and United Farm Workers are also headquartered on the grounds.

Suarez, 62, is a native of the west Central Valley farm town of Hanford, Calif. who now resides with his family in Tennessee. Self-taught, he has worked in bronze and stone as well as painted on canvas.