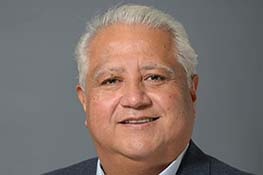 As the middle son of the civil rights and farm labor leader and as president of the Cesar Chavez Foundation, Paul F. Chavez has spearheaded the impressive expansion of the non-profit his father founded in the 1960s under a different name. The Foundation has grown and adapted into a successful group of social enterprises that support hundreds of thousands of Latinos and working families, inspiring and transforming communities from rural to urban areas throughout the Southwest and across generations.

Under his tenure, the foundation has seen unprecedented growth in four core programmatic areas: building and managing more than 5,000 units of high-quality affordable housing; operating an eight-station Spanish and English-language radio network that reach over 1.5 million people; providing academic products and services to students in under-resourced communities, and operating the National Chavez Center which preserves and promotes the legacy of Cesar Chavez.

One of eight children of Cesar and Helen Chavez, Paul has spent his entire life with the movement. Prior to his work with the Chavez foundation, Paul Chavez served with the United Farm Workers of America as a union organizer, contract negotiator, political director, lobbyist in Sacramento and Washington, D.C., and director of marketing operations. He was also a personal assistant to his father.

Paul earned an associate degree in negotiations and collective bargaining at the Fred W. Ross Labor Education Center’s School of Collective Bargaining in 1979. He lives and works out of the National Chavez Center at La Paz in the Tehachapi Mountain town of Keene, Calif.