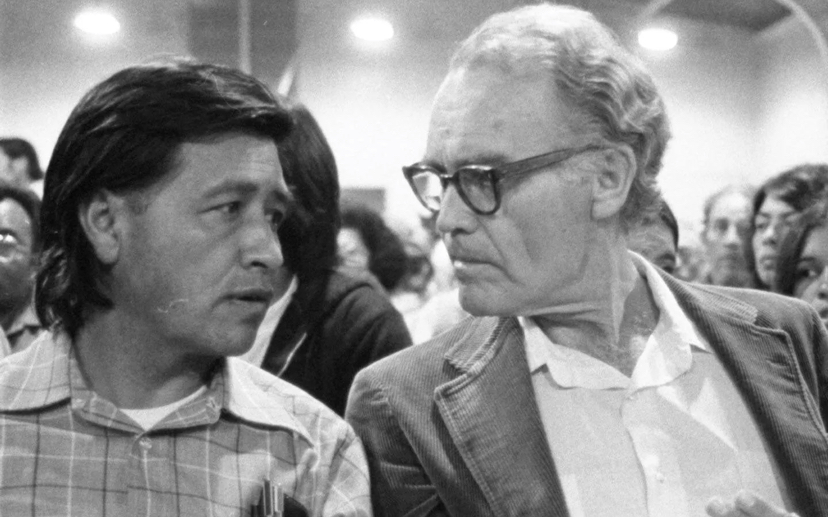 Cesar Chavez and Fred Ross Sr. knew it would take a movement to fight measures aimed at intimidating Latino voters. So they built one.

By Paul Chavez and Fred Ross Jr.
published by The Nation Magazine on June 23, 2021

Why did President Biden place Cesar Chavez’s bronze bust in the Oval Office on Inauguration Day—27 years after his passing? Why did 17 million Americans support his boycott of California table grapes in 1975? Is it because the genesis of Chavez’s activism was community organizing and voter engagement? He was a civil rights leader before becoming a farm worker leader, and he embraced a transformational vision of trade unionism. With Republican lawmakers in many red states enacting laws to thwart voting by people of color, this is a good time to examine Chavez’s roots.

Chavez’s journey to the White House began at age 25 when he met Fred Ross Sr., one of America’s great community organizers.

“The first time I met Fred Ross, he was about the last person I wanted to see,” Chavez said, eulogizing Ross in 1992. Ross came to the rough East San Jose barrio of Sal Si Puedes (Get Out If You Can) in spring 1952, organizing a chapter of the Community Service Organization after forming the mother chapter in East Los Angeles. Chavez had recently left the fields. He initially thought Ross was a college professor down from Berkeley or Stanford to study Mexicans and ask insulting questions.

So during a “house meeting” hosted for Ross in his home’s packed living room, Chavez planned to “get even” by having some tough young buddies scare him away. Then Ross started talking about empowerment through the ballot box—and changed Chavez’s life. Ross wrote in his diary, “I think I’ve found the guy I’m looking for.”

Over a frenetic 40 days and nights Chavez helped the CSO to register 4,000 voters. On Election Day, the county Republican Party sent “challengers” to intimidate first-time Latino voters—reminiscent of the voter suppression civil rights activists resist in the South today. The strategy backfired. One Latino voter said, “At first I got really mad, but then thought if they go to all that trouble to keep us from voting, it means they are paying attention to us.”

When so many Latinos voted, county officials ordered packinghouses to stop dumping waste into barrio creeks, and fixed cesspools that had been causing amoebic dysentery.

Chavez and Ross directed registration of 160,000 Latinos and turned out voters in the 1960 John Kennedy presidential race, winning praise from John and Robert Kennedy, who met with Chavez.

Chavez traveled the state stumping for Kennedy. John Lewis recalled spending the final weeks before the June primary accompanying Chavez “deep into some of the poorest neighborhoods in Los Angeles, both Latino and African American. We met and talked with countless people—one by one or assembled at rallies.” High turnout in Latino and Black precincts brought Kennedy victory before he was shot at the Ambassador Hotel.

Ross taught Chavez that organizing is about listening to people, engaging them on issues they care about, and spurring them to collective action. CSO became the biggest, most influential California Latino civil rights group of the 1950s and early ’60s. “CSO was the best and most effective grass roots organization to which I have belonged,” affirmed Cruz Reynoso, later the first Latino California Supreme Court justice.

Fulfilling his dream of organizing farm workers in 1962, and with Ross’s help, Chavez—joined by Dolores Huerta and Gilbert Padilla—used the community organizing principles they learned in CSO to build the UFW. They knew only a union could address abuses in the fields. But they also believed it would take more than a union to overcome the crippling dilemmas field workers faced upon returning to their communities; it would take a movement.

The same voter suppression CSO fought in the ’50s is now experiencing a resurgence. So passing HR 1, the For the People Act, and then organizing to turn out voters would be the truest tribute to Cesar Chavez, John Lewis, and Fred Ross.

Paul Chavez is president of the Cesar Chavez Foundation, which keeps his father’s legacy alive through its affordable housing, educational radio, and academic tutoring endeavors.

Fred Ross Jr.Fred Ross Jr. is a veteran labor, community and political organizer who was trained and mentored by Cesar Chavez, Dolores Huerta, and his father, Fred Ross Sr.