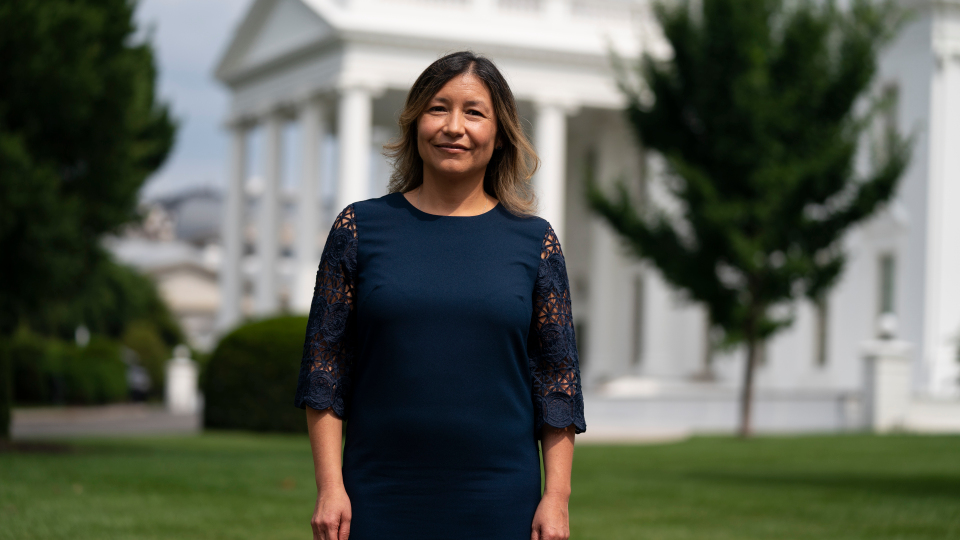 WASHINGTON (AP) — When President Barack Obama flew to California to dedicate a national monument to Latino labor leader Cesar Chaveznearly a decade ago, a group of the activist’s relatives were invited to pose for photos with the president.

Julie Chavez Rodriguez, Chavez’s granddaughter, hung back. As a member of Obama’s staff, she had traveled with the official party to the event, but did not want to call attention to herself.

Only when Obama’s senior adviser, Valerie Jarrett, insisted did Rodriguez reluctantly step forward, barely making it into the frame.

“I said, ‘Julie, you have to be up there with your family,’” said Jarrett, who was Rodriguez’s boss in the White House Office of Public Engagement. “And she said, ‘No, I’m staff today.’”

White House staffers are often of a type, hard-charging strivers who crave their own sliver of the limelight or even trade on a famous name. Rodriguez is a clear exception as she begins a second tour serving a president, this time as director of intergovernmental affairs for Joe Biden.

Rodriguez and her staff help state, local and tribal governments, and Puerto Rico and the other U.S. territories, with their federal government needs. Lately, that has centered on combating COVID-19 and distributing aid from the $1.9 trillion in Biden’s coronavirus relief plan.

Jarrett and others who have worked with Rodriguez describe a dedicated worker who, while shaped by a famous progenitor, doesn’t put her family front and center.

Cecilia Munoz, who led the intergovernmental affairs office for five years under Obama, said Rodriguez has the job now because she is “Julie” — not because she is a Chavez.

“Being a Chavez is part of who she is,” Munoz said, “but she’s there because she is so skilled and has such deep integrity.”

And because Biden wanted her on his team.

Rodriguez is among a group of Latinas serving in the White House and advising Biden on matters ranging from communications to policy. Latino advocates had accused Biden during the 2020 presidential campaign of not doing enough to reach out to these voters.

New presidents always freshen up the look of the Oval Office, both to reflect their personal tastes or send broader messages about their values and what inspires them.

Biden’s updates for a time included placing a bronze bust of Chavez among family photographs on a desk directly behind his own, giving the late labor leader’s likeness prominent placement any time Biden was seen at his desk. The bust is now on a pedestal elsewhere in the Oval Office.

Rodriguez was overwhelmed the first time she saw the bust of her “Tata” in the Oval Office. Her grandfather is a hero to her, someone she hoped to emulate, she said in an interview. Rodriguez described the “profound sense of pride” she felt in knowing that “the contributions that our community has made are being recognized in the most powerful room in the world.”

Biden supported her grandfather’s cause of improving conditions for migrant farm workers, Rodriguez said, and both men were influenced by their Roman Catholic faith and its teachings.

“I think there’s that sort of shared history and shared … support for the cause that he was leading,” Rodriguez said of Biden.

The Biden family’s admiration for Chavez and his legacy also is shared by the first lady.

Jill Biden flew to California earlier this year for the March 31 commemoration of Chavez’s birth. She visited the Forty Acres property near the city of Delano, the first permanent headquarters for the United Farm Workers union.

A national historic landmark, the location is where Chavez conducted two lengthy fasts — 25 days in 1968 for nonviolence and 36 days in 1988 over the threat of pesticides. It’s also where thousands of farm workers received COVID-19 vaccinations this year.

Rodriguez, 43, was born in Delano to Chavez’s daughter, Linda, and her husband, Arturo Rodriguez. Her grandparents, Cesar and Helen Chavez, volunteered full time for the United Farm Workers of America organization, and Rodriguez often went to labor rallies with both couples and helped them with community outreach.

She grew up in the farm worker movement and was active in campaigns, picket lines, boycotts, marches and union meetings, said Paul Chavez, Rodriguez’s uncle.

He recalled how she would hop off the bus when she got home from elementary school and pop into the offices to see what was going on and offer to help. She was engaging and inquisitive, with a level of maturity beyond her years, he said.

“She knew how to talk to older folks and kids her age,” Paul Chavez said.

After graduating from the University of California, Berkeley, in 2000 with a degree in Latin American studies, Rodriguez worked at the foundation named for her grandfather before she became a volunteer on Obama’s 2008 presidential campaign in Colorado.

She was at the Interior Department working on a youth initiative when Jarrett recruited her to work on immigration and Latino outreach at the White House.

Jarrett said she wanted Rodriguez on her team because of her “extraordinary reputation for excellence, hard work, competency” and “focusing not on herself, but on how we could engage as many voices” as possible.

Rodriguez joined Biden’s campaign to help oversee Latino outreach after Harris dropped out. After Biden was elected, he named her to lead the office of intergovernmental affairs.

Her uncle said Rodriguez’s standing with the president is an encouraging message for young people of color.

“Her presence and her being is a very powerful thing for people that haven’t had a lot of opportunities, and especially those that have been shut out of the political and civic affairs of our communities,” Paul Chavez said.

Kendra Barkoff, who served a stint as Interior Department press secretary under Obama, with Rodriguez as her deputy, said Rodriguez was so “humble” that staff members didn’t realize the family connections at first.

“Once we learned, we were even more inspired by her,” said Barkoff.

Rodriguez still answers Barkoff’s telephone calls and emails even though they haven’t worked together since Barkoff went to the private sector in 2015.

“She’s pretty high up in the White House and still calls me ‘boss,’” Barkoff said.