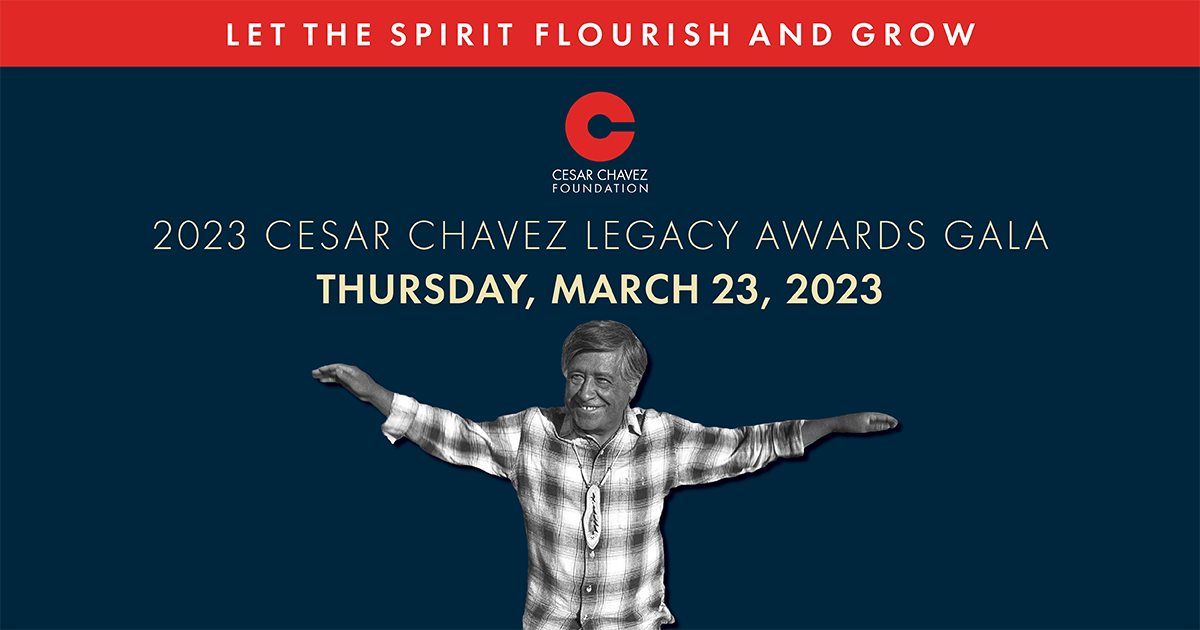 Join us for the 2023 Cesar Chavez Legacy Awards Gala

Join us and support the Cesar Chavez Foundation on March 23, 2023, as we collectively gather to make an impact and uphold Cesar’s vision for a brighter future.

Your support through the Cesar Chavez Foundation gala allows us to serve our most vulnerable working families through affordable housing development, education, broadcast communications, and the National Chavez Center, which preserves and promotes the legacy of Cesar Chavez. We can’t do it without you and look forward to seeing you at the Millennium Biltmore Hotel Los Angeles in March! 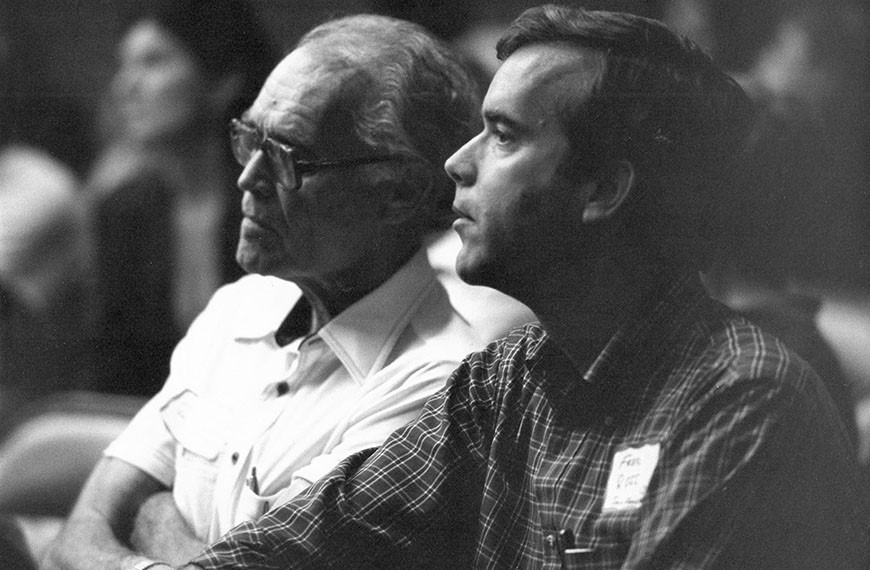 It is with profound sadness that the Cesar Chavez Foundation mourns the passing of Fred Ross Jr., whose six-decade-long organizing career empowered poor and oppressed workers to overcome bigotry and exploitation through self-organization and collective action. His wife, Margo Feinberg, who shared his passion for empowering workers and time with family and friends, reported that Fred passed away on the evening of Sunday, November 20, having just celebrated his 75th birthday. The cause of death was pancreatic cancer.

His father, Fred Ross Sr., was a legendary community organizer who Cesar Chavez credited for “training me and inspiring me and being my hero.”

In his eulogy for Fred Ross Sr. in 1992, Cesar said his “deeds live on in the hundreds of organizers he trained and inspired. Not the least of them is his son, Fred Jr., who made his father very proud.” “Fred Ross Jr. was a good shepherd of his father’s legacy,” affirmed Cesar’s son, Cesar Chavez Foundation President Paul F. Chavez. “Part of Fred Jr.’s mission was developing future generations of leaders and organizers among poor and working people—perhaps the greatest thing an organizer can achieve,” Paul Chavez said.

Fred Ross Jr. was born in Long Beach, Calif. in 1947. His mother, Frances Ross, also influenced her son, having pioneered services for the mentally ill. Fred Jr.’s early childhood was in Boyle Heights where his primary language was Spanish.

After graduating from Redwood High School in Marin County and U.C. Berkeley in 1970, Fred joined the United Farm Workers, helping organize that year’s giant Salinas and Santa Maria lettuce and vegetable strikes. In addition to his father, at the UFW Fred Jr. was trained and mentored by Cesar Chavez and Dolores Huerta. The next few years were spent organizing farm worker campaigns in Oregon and Washington state, and leading the boycotts of grapes, lettuce, and E.&J. Gallo wines in the Bay Area.

After taking office in January 1975, California’s new governor, Jerry Brown, was not responding to UFW calls for a farm labor law granting field laborers the rights to organize, vote in union elections, and negotiate with their employers.

So, Fred proposed and spearheaded the UFW’s high-profile march from San Francisco to Gallo’s Modesto headquarters. Nearly 20,000 workers and supporters filled the streets of Modesto on the last day of the trek, March 1, 1975. The next day the UFW got a call from the governor’s office. The following week Cesar Chavez and UFW General Counsel Jerry Cohen met Jerry Brown at his house in Los Angeles’ Hollywood Hills. Fred’s march on Gallo kick-started three months of negotiations producing the historic Agricultural Labor Relations Act. When the first farm elections began that year, Fred directed UFW organizing in the Santa Maria area.

Fred pursued the law, graduating in 1980 from the University of San Francisco Law School and working as a public defender. By 1985, he led Neighbor to Neighbor, turning the national grassroots organization into an effective foreign policy advocacy group challenging the Reagan administration’s murderous Contra War in Nicaragua and its backing of death squads in El Salvador. He used his organizing skills leading the 1987 San Francisco grassroots get-out-the-vote drive electing Nancy Pelosi to Congress.

By 1998, Fred returned to his labor roots by organizing health care and service workers for the Service Employees International Union. In 2009, he began crafting an innovative organizing program for the International Brotherhood of Electrical Workers Local 1245, recruiting, engaging, and training the next generation of organizers from the ranks of its members dedicated to social justice and union solidarity. Fred retired from the union in February 2022.

Fred spent this past year working with filmmaker Ray Telles on a full-length feature documentary about his father, showing how collective action can combat prejudice and greed.

The father, Fred Ross Sr., had remarkable achievements. But perhaps his best legacy was Fred Jr. Colleagues over many decades said Fred Jr.’s organizing talents matched anyone’s, including Cesar and Fred Sr. As with his father, Fred Jr.’s labors were never about himself. He was always about empowering others to believe and indeed know they were responsible for the progress they won. Fred Jr.’s nature was ceaselessly positive; he always thought things could be done.

Fred Ross Jr. is survived by his wife, Margo Feinberg, a union labor lawyer; their two children, Charley and Helen Ross, who were introduced to picket lines as toddlers; brother Bob Ross; sister Julia Ross; and a legion of loving friends and family members and generations of organizers.

In lieu of flowers, the Ross family asks that contributions go to the Fred Ross documentary project. Written condolences to the family may be sent to FredrossMemories@gmail.com

Community members are invited to help the Cesar E. Chavez National Monument celebrate 10 years to the day since President Obama journeyed to Keene, Calif. for dedication of the 398th unit of the National Park Service before 7,000 people on the historic grounds where the farm labor and civil rights leader lived and labored his last quarter century. A commemorative ceremony is set in the monument’s Memorial Garden located at 29700 Woodford-Tehachapi Road in Keene starting at 10 a.m. on Saturday, Oct. 8, 2022.

The event is free to the public and hosted by the Cesar E. Chavez National Monument and National Parks Service in partnership with the National Chavez Center, the Cesar Chavez Foundation, and National Park Foundation. Speakers include Chavez foundation President Paul F. Chavez; Frank Lands, regional director of the National Park Service; and Anne Stephan, superintendent of Chavez national monument. Visitors are invited to view new exhibits in the monument’s Visitor Center, get a special National Parks Passport commemorative cancellation stamp, and see the newly restored exterior of the modest nearby Chavez family home, where Cesar and Helen Chavez and their children resided.

The Chavez national monument was established on Oct. 8, 2012, by President Obama through Presidential Proclamation under the Antiquities Act of 1906 to honor the life and work of Cesar Chavez, particularly his role as a 20th Century Latino civil rights leader and his passionate dedication to the American farm worker movement. The monument is open year-round from 10 a.m. to 4 p.m., except on Thanksgiving, Christmas, and New Year’s Day.

What: 10th anniversary of the dedication by President Obama of the Cesar E. Chavez National Monument